The Ambassador's Cup of the Republic of Korea in Taekwondo (WT – World Taekwondo version), played annually in the Turkmen capital, was held in the Olympic town of Ashgabat, except for the period that was associated with restrictions due to the global pandemic that swept the whole world.

Finally, all kinds of athletes' training camps and competitions began. The current Cup was attended by athletes of different weight categories and age groups – younger children, cadets and juniors from Ashgabat, Akhal, Mary and Dashoguz regions. There are 130 participants in total. 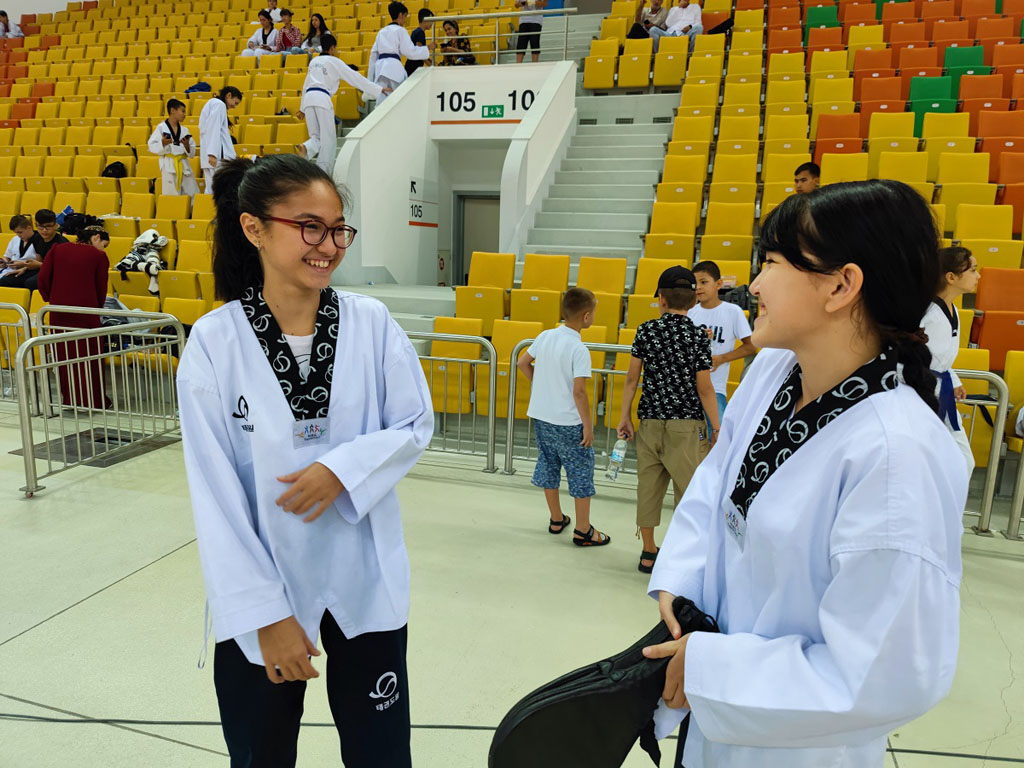 By the way, among the admirers of this type of martial art of the East were not only boys, but also girls.

The purpose of the competition is to test the nearest reserve of the national team, the general level of Turkmen taekwondo athletes after a forced break and, taking into account all the pros and cons, begin systematic preparation for international tournaments.

We should immediately note that the current tournament, despite the break in purposeful work with athletes, left positive impressions on the organizers of the Cup, including the Korean side.

The modern picture of such a phenomenon as taekwondo is quite diverse and diverse, not even every specialist without prior training will be able to explain how one direction differs from another. Or what caused all the twists and turns that gave rise to an abundance of styles and many schools gathered under the banner of taekwondo, one of the most popular martial arts on our planet.

The history of martial arts – both Eastern and European, African, American – has its roots in ancient times. Most of them have a lot in common – mainly attacking punches (fist, palm edge, wrist, elbow, etc.), legs (foot, heel, knee, etc.), protection techniques, departures from the line of attack, throws, grabs, etc., etc.

Martial arts were originally applied in nature as a military art used for its intended purpose. In the East, they were also used as an effective method of spiritual education. And quite rarely – as a spectacle.

Martial arts of the East (karate, judo, jiu-jitsu, etc.) began to spread in the world in the XX century, and especially after the Second World War, thanks to the efforts of such outstanding teachers as Gitin Funakoshi, Masutatsu Oyama, Lee Jungu, etc.

Taekwondo owes its entry into the international arena to General Choi Hong Hee (in some transcriptions – Choi Hong Hee). 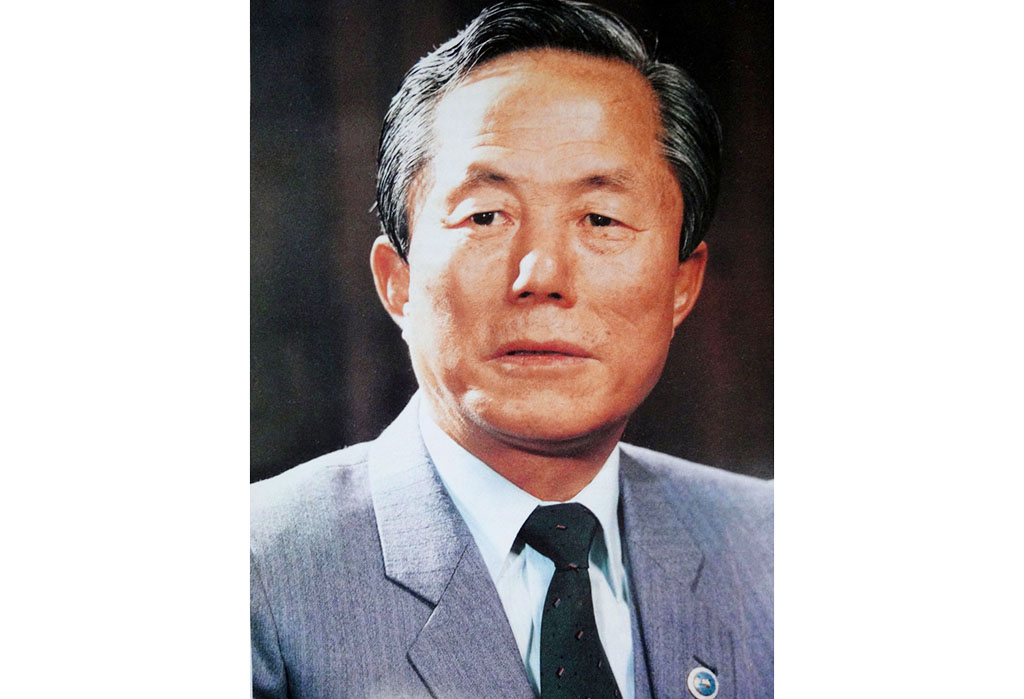 In 1950, under the leadership of a young general, the patriarchs of nine authoritative schools of Korean wrestling, united, selected the most effective techniques, on the basis of which they began to create a new, codified style. And five years later, a martial art was born, which was called taekwondo, where "do" means the path of knowledge and self–improvement, "tae" – a kick in a jump, "kwon" - a punch.

Modern Western schools focus on the actual external technique of struggle, emasculating everything that goes beyond its scope, and Eastern schools, as already mentioned, pay great attention to the spiritual aspect. So, the founder of modern taekwondo, said that it was "a system of spiritual training and self-defense techniques without weapons." And since no weapons are used in taekwondo, the goal of an adept of this martial art is to make his body a weapon.

However, due to the split in the ranks of Taekwondo and the general's departure from his homeland, the South Korean government built the Kukkiwon Taekwondo Development Center in Seoul. And the following year, after holding the world championship, it established a World Federation – WTF (World Taekwondo Federation), which since 2017 has been called shorter – WT (World Taekwondo).

Despite the whole list of varieties in the taekwondo system with its own rules of competition, judging, terminology, etc., two authoritative versions remained key in the international arena – ITF and WT.

The last of them – the style of Kukki (it is also called Olympic) differs from other versions of taekwondo – stands, sports equipment used during competitions, the rules of their conduct, etc. A

stunning PR effect in relation to taekwondo was presented at the opening of the Summer Olympic Games in Seoul in 1988, where a large group of taekwondo athletes rapidly demonstrated dizzying a performance at the end of which, as one, specially cut boards were crushed into splinters.

The enthusiastic media savored the amazing impressions left by the magnificent spectacle, which was really fantastic in its harmony and unity of a large group of Korean athletes. And twelve years after passing all the taekwondo procedures, WTF was included in the program of the Summer Olympic Games. 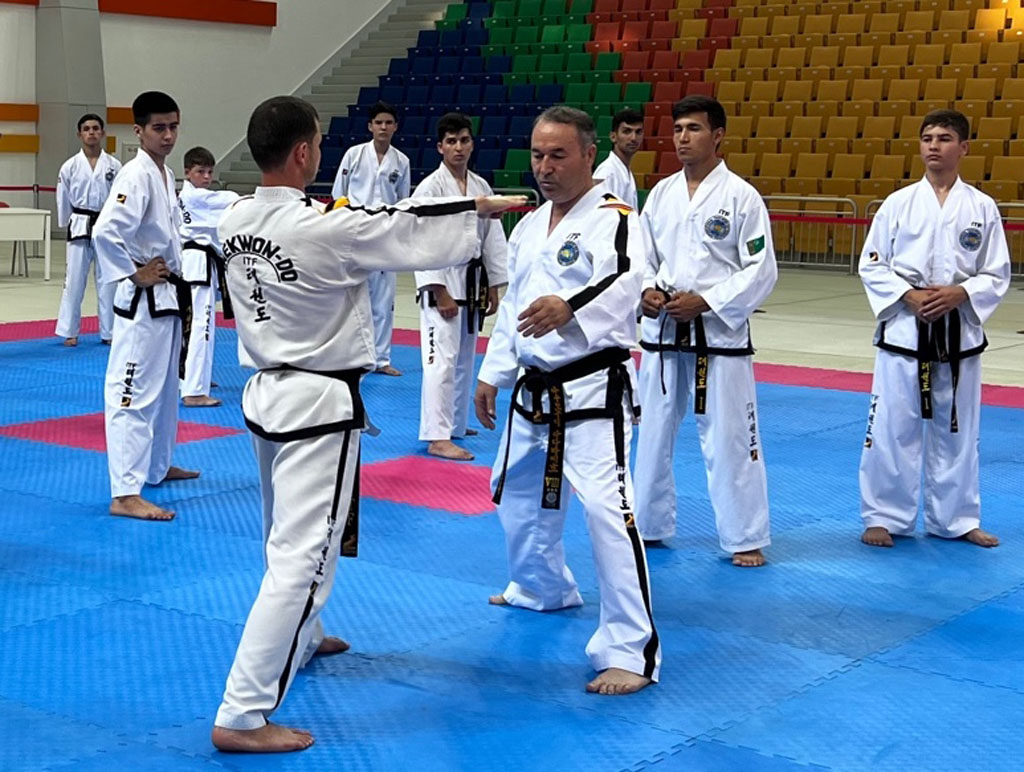 ...Taekwondo paved the way to Turkmenistan in the early 90s of the last century. But it was the ITF version. It was developed by Aidogdy Atabayev, who is currently the head coach of the national team and the most titled of the Turkmen taekwondo athletes – he is the owner of a black belt of 8 dan (total in the ITF of 9 dan). He is also a member of the Asian Federation of this sport. Thanks to his efforts, the National Taekwondo Federation was established in Turkmenistan in 1993.

Aydogdy Atabayev did everything possible for his idol, General Choi Hong Hee, to visit Turkmenistan. And this unforgettable day came in 1999. Judging by the memories of eyewitnesses, the founder of taekwondo was satisfied with the steadfastness of the Turkmen mentor and the level of development of his followers.

...And the formation and development of taekwondo in Turkmenistan according to the WTF version is connected with the activities of the owner of the black belt V dan Byashim Roziev, who successfully passed the exams in 2019 for the title of "International Master of the III class". A year later, he established and headed the WT (World Taekwondo) Center of Turkmenistan.

Since then, this high title has enabled Byashim Roziev, who received special training at the Kukkiwon Training Center in South Korea, to work as a WT taekwondo coach in any country in the world.

... Many still remember the performances of the Turkmenistan national team at the Asian Games-2017, held here, in the complex of martial arts of the Olympic town. Ashgabat then gathered the stars of the first magnitude of the Asian part of the continent, including representatives of the country that gave the world taekwondo – the Republic of Korea.

The champions of Asia, the world and even the Olympic Games gathered in the Turkmen capital at that time. A considerable number of athletes from different countries were represented in each weight category. Despite the intense competition, at that time a very young team of Turkmen taekwondo athletes (WT), although they did not win medals, performed well, which was noted by many sports observers. 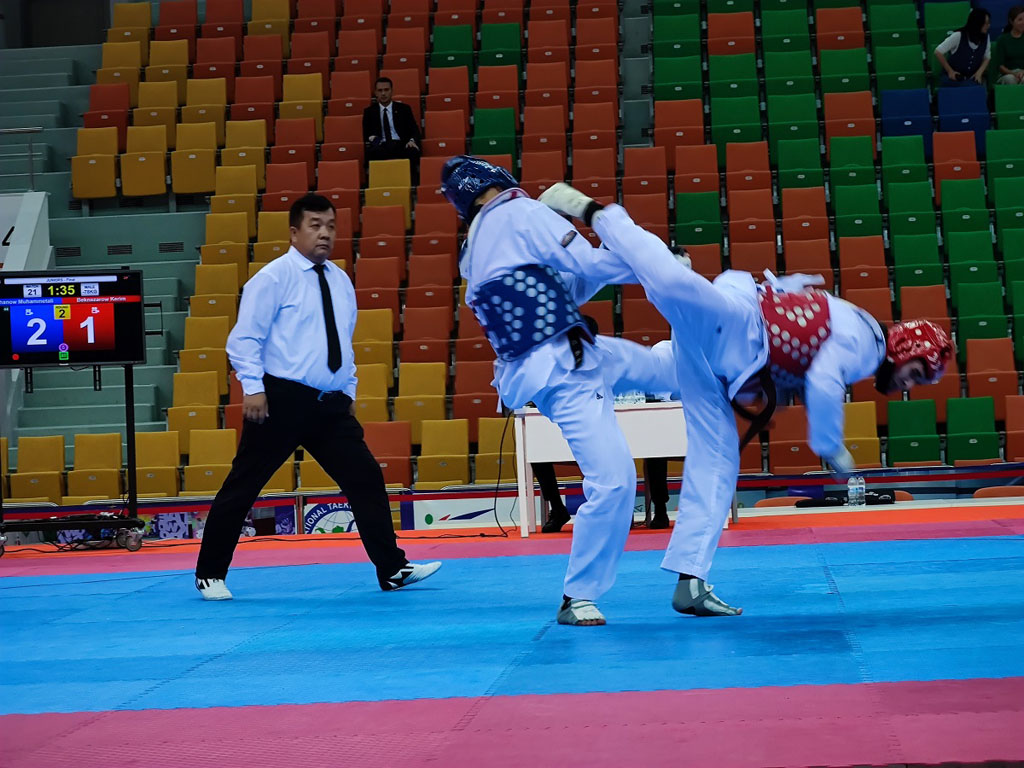 After that, Turkmen taekwondists, in addition to the V Asian Indoor and Martial Arts Games, performed at world championships, major international championships and, importantly, in rating tournaments, where athletes were awarded points in the world and Olympic rankings. 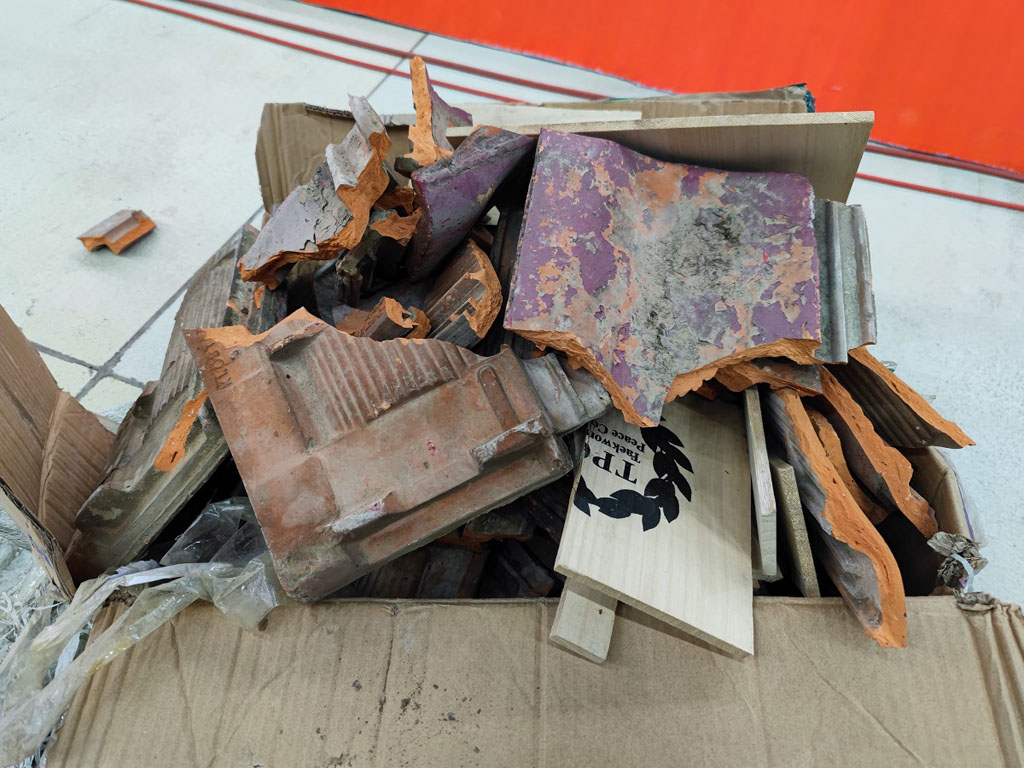 One of the disciplines used in WT is breaking various hard objects – special boards, tiles, bricks, etc. in order to demonstrate the power and effectiveness of taekwondo techniques. This was demonstrated by Turkmen athletes in Ashgabat at the 2022 Ambassador's Cup of the Republic of Korea.

However, it is not superfluous to note that this discipline is not applied at the Olympic Games. 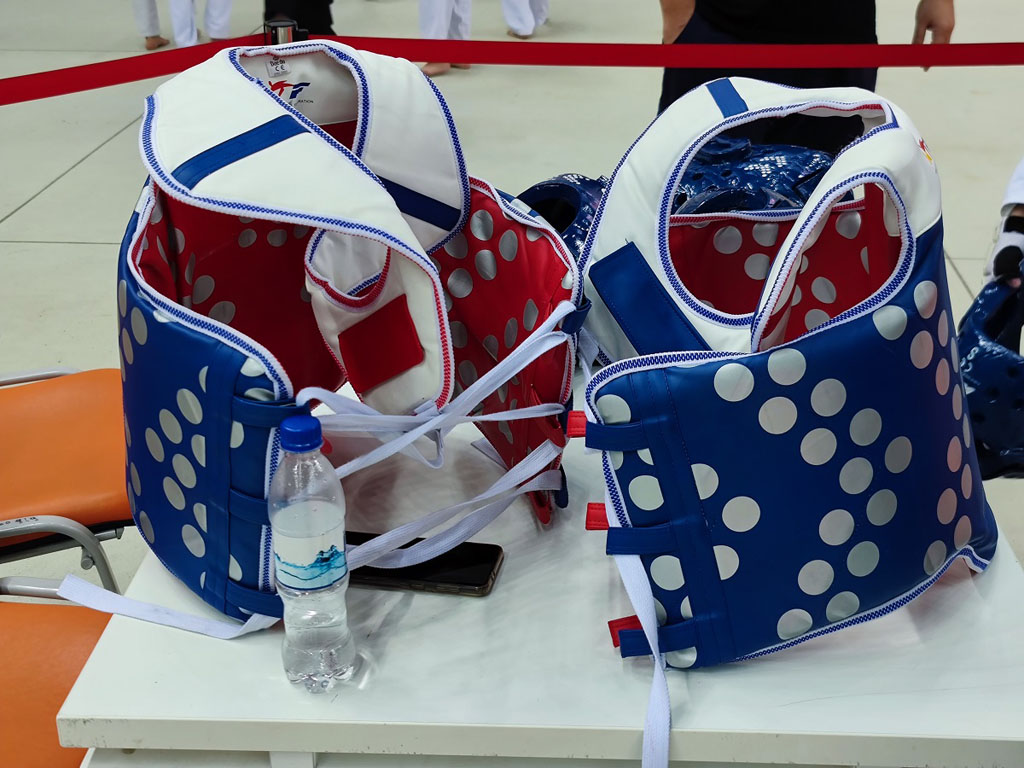 To soften powerful blows, taekwondists wear special vests, pads, and a special helmet on their head. The blows inflicted on the vest and helmet are recorded using electronic system sensors mounted in the ammunition, which greatly facilitates the judging of fights, excluding the so-called human factor (the same equipment is used by fencers at competitions). 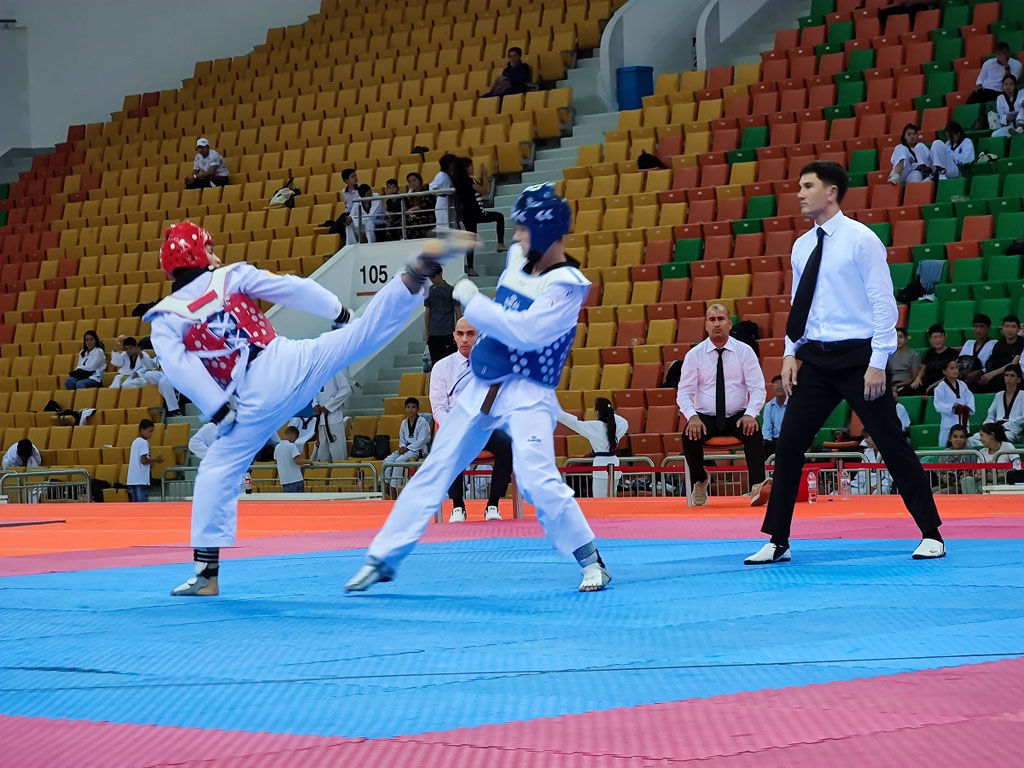 In the Ashgabat tournament, which, according to many, was held at a fairly good level, all these innovations introduced into taekwondo WT were once again successfully applied. 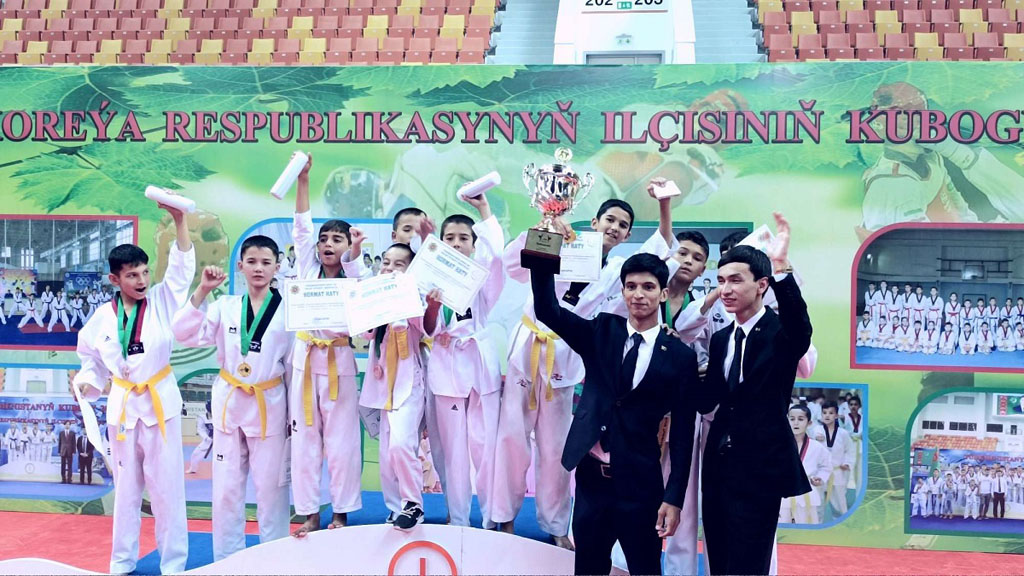 In a stubborn struggle with their rivals, the first place was taken by the team of Ashgabat, which won 13 gold medals, as well as the Cup of the Ambassador of the Republic of Korea.

Only two gold medals were less for the taekwondo athletes of the Mary region. They have 11 awards in their arsenal and the second place on the podium. The third place with two gold medals was taken by athletes from Dashoguz region.

The Ambassador of the Republic of Korea Shin Sung-chul expressed his opinion on this and other occasions: 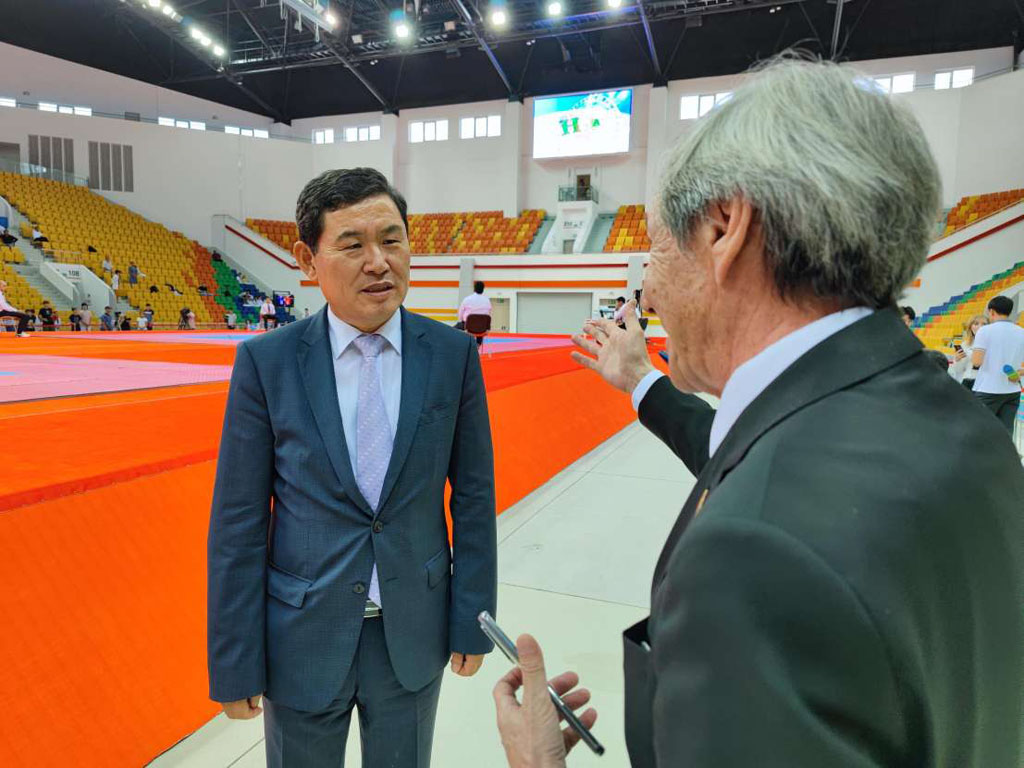 – What is taekwondo for Koreans? A sport, an interesting hobby, a way to support your health?

– Taekwondo is a traditional martial art, but it teaches a lot. Including spiritual values – respect for people and communities. It teaches support for each other, mutual assistance and cooperation. And the spirit of the Korean people is based on these principles. The peculiarity of taekwondo, in comparison with others, is also that many Koreans have been learning this type of martial arts since childhood, in halls near their home.

In Korea, as in Turkmenistan, all adult men must complete compulsory military service, but in our country soldiers are also taught taekwondo, which makes it the national sport of the Korean people. And this kind of martial arts is a part of the daily life of many Koreans, as well as our national pride.

– Tell me, how do you assess the level of Turkmen taekwondo athletes?

– Despite the fact that taekwondo has been cultivated in Turkmenistan relatively recently, and there are not so many people involved in this sport in your country yet, I still think that with such performances as today, Turkmen youth promotes taekwondo, demonstrating their excellent skills and their full potential. I am sure that with regular training, Turkmen athletes will reach a level in a short period of time when they will be able to compete on equal terms with famous masters at international tournaments.

The Korean Taekwondo Development Assistance Fund has previously sent trainers to Turkmenistan, as well as equipment necessary for classes and competitions. I hope that such assistance is a good help in raising the level of Turkmen athletes. And I assure you that our embassy will continue to work diligently in this direction, providing worthy support to local taekwondo athletes. 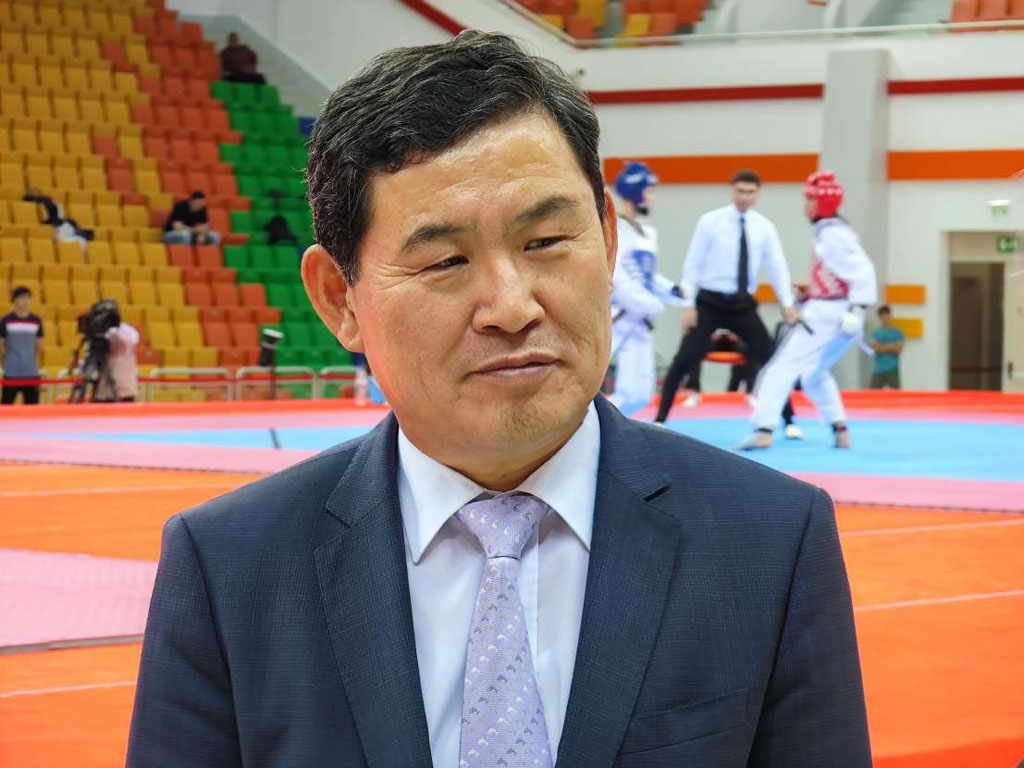 – Mr. Ambassador, how do you think the current Cup is being held in Ashgabat?

– I have been closely watching all the fights for two days. And frankly, I got a lot of pleasure as a spectator. I did taekwondo myself when I served in the army, and while working as a diplomat, I always tried to support this sport in many countries. I think that taekwondo can be of great importance not only as a martial art, but also from the point of view of educating the younger generation. A strong person who knows the techniques of taekwondo is spiritually perfect and fair. He will never hurt the weak. On the contrary, he will protect him.

Therefore, we are making a lot of efforts to increase the number of those who are interested in and practice taekwondo. I am convinced that modern Turkmen youth, along with other methods, will be able to harmoniously train their mind and body also through taekwondo classes. And I am also convinced that taekwondo, as the spirit of the Korean people, will contribute to deepening friendship and cooperation between our two peoples and strengthening mutual understanding between states.

– What prospects do you see for taekwondo in Turkmenistan?

– I know that Byasim Roziev, as chairman of the Taekwondo Center, works hard and diligently for the development of this sport in Turkmenistan. Many teenagers, boys and girls are engaged in taekwondo with great enthusiasm, and their progress in this direction is becoming more convincing every year. If this trend continues, there is a high probability that they will win at such major international competitions as the Olympic Games. The future of taekwondo in Turkmenistan is very promising! 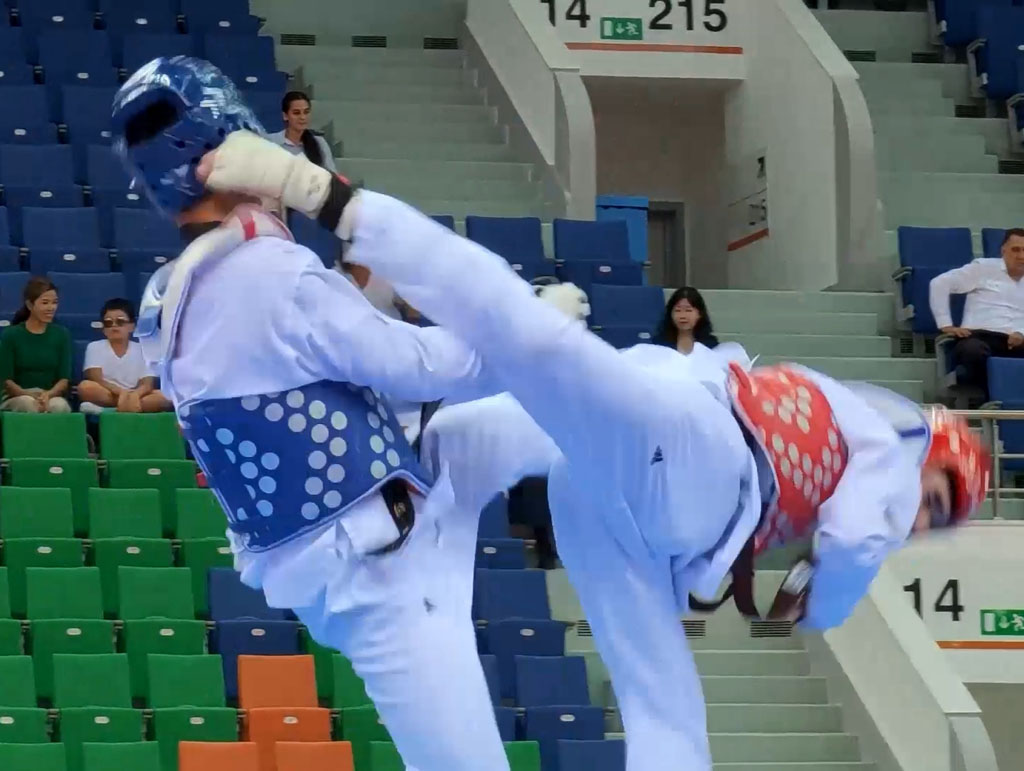